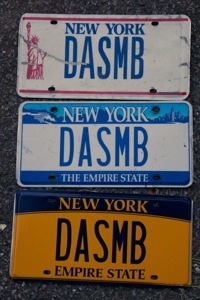 It is a shortening of “das Megabyte.”

Crave a backstory? Pick one:

1) I have three Ms as initials, and sign my name M3 (as in, M to the power of 3). It looks a bit like MB, the abbreviation of “Megabyte.” At one point, a friend (coming down after a Hogans Heroes marathon) began teasing me: “MB…vas ist das MB…wo ist das Megabyte?” Anyway. It stuck.

2) In the days of coupler modems and Apple ][s, I went around as El Kilobyte. When I got my first x86 PC (a horrible Packard Bell with no OS to speak of, purchased at Lechmere), I decided to upgrade to “The Megabyte” when logging into the local BBS hub The Times. On first log in, I was immediately booted from the system. So I called up again, found my account unusable, and so I logged in as “El Megabyte.” Same thing. On a third call, this time as “Das Megabyte,” I was pulled into a chat with the SysOp, who said “this system is going down now!!!” And it did. As far as I know, it never came back up. Unsubstantiated rumors spread about a guy taking the money [it was a pay system, everything good was back then] and skipping town. Anyway. It stuck.

3) Pronunciation of the acronym for the Dropship Systems Maintenance Backlog, an internal JIRA project at CommerceHub. Anyway. It stuck.

Worth knowing:
– When I was in college, at least two other people were using the same handle. I don’t think either of them use it anymore.

– Das is apparently the neuter form; the masculine is der and the feminine die. This is accidental but effective as Der Megabyte sounds dumb. Die Megabyte I could live with.

– I bought dasmegabyte.org in 1998? 97? Whenever DirectNic.com started business. Dasmb.com was formerly owned by the District and Service Marching Band, who actually made better use of it than I have.

– The twitter handle @dasmb is not owned by me, which is my own stupid.