As a software architect, I do a lot of modeling. White-boarding and pencil-on-paper are my preferred media but there are times when the visceral, ephemeral nature of these forms doesn’t cut it. Like when working with remote teams. Or giving a talk in a room with no white-board, which is sadly the majority of rooms.

I’ve experimented with iPad-first modeling in the past with poor results. The software isn’t terrible (I especially like the apps Jot and Grafio), but the hardware interface doesn’t lend itself to intricate models, or even legible text, when applied with the speed of a marker. An Adonit Jot (no relation to the software) multi-touch stylus improves the effective resolution but only by about 2x.

For this reason I am demoing (bought, but might wind up returning/reselling) an iPad Pro 9.7″ and Apple Pencil. The 32GB model, plus pencil, run $698, which is roughly $200 more expensive than the 64GB Air 2 I bought 2 months ago. This would be worth the money if it allows me to produce expressive software diagrams quickly.

I enjoy the iPad and Pencil — they are good enough that the barrier is now my skill with my software. The quad speakers are loud and accurate. And the screen is the best I’ve ever seen, even at very low brightness levels.

However: the new Smart Cover is a ridiculous mess.

Earlier Smart Covers dramatically enhance the iPad experience. In one thoughtfully designed sheet of premium material you have an origami-like stand, along with some screen drop protection, an unobtrusive profile when closed and best of all the microfiber interior. iPads suck up fingerprints like crazy and having a cleaning cloth attractively attached to the unit helps improve effective screen quality. You could even argue that it’s a security measure (given that lifting a fingerprint could give an attacker access to the device). Besides, they look cool, and flipping the magnets on and off is a satisfying tic.

The Smart Cover for the Air was even better than the original, much more close fitting and with a rubber hinge that was less attractive but more durable and seems to pick up less grime. It also avoided the weird hanging edge beneath the earlier iPad’s curved right rear bezel.

So what’s wrong with the new one? Well, Apple engineers apparently expect every Pro buyer to invest not just in a Smart Cover — which is all a responsible user should need to protect their device and also exposes the exquisite thinness and stability of the aluminum design — but a $69 silicone sleeve. And to accommodate this expectation, the Smart Case for the Pro has just a little bit of extra tolerance all over it: meaning that if you don’t buy a sleeve, it fits like complete shit.

What’s more, it’s now priced $10 more than the standard Air sleeve. For some bizarre reason, Air sleeves are incompatible with the Pro, to the point that they reversed the magnets on the iPad Pro’s surface, so an Air sleeve actively repels from the edge, rather than clinging to and protecting it.

The effect here is something like an ill-fitting suit, with the added advantage of an annoying edge right where the fingers of your left hand go, blocking access to the volume controls. In an upright position, the iPad reclines much further than the iPad Air. And there’s a new, far more unsatisfying iPad tic I’ve adopted: trying to smooth out the lumpy back surface. 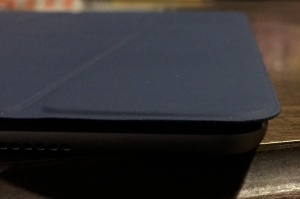 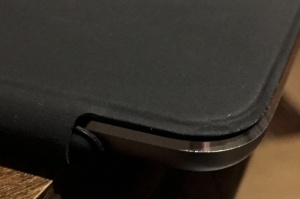 Pro Smart Cover. I mean just look at this shit. 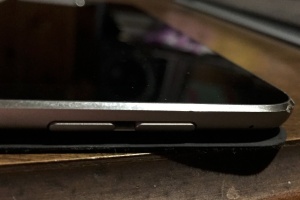 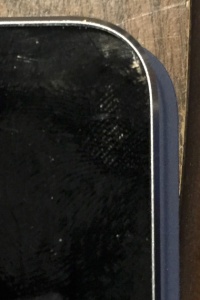 Mind the gap. Maybe I’ll get a second iPad to prop up the first one.

I mean, it’s not a pure cash grab. I suppose if I wanted a big, nasty bit of rubber on my iPad, I would want it to work well with my cover. I guess workers of the BYOD/pop-up shop economy want something durable. And of course there’s the iPhone 6-style jutting rear camera lens,  which means this excellent drawing tool doesn’t sit perfectly level on a table without a case.

But come on. Lots of us buy thin, attractive, lightweight devices precisely because they’re — can you believe it — thin, attractive and lightweight. We would like a well-fitting cover so we can carry them without getting our disgusting mammalian oils all over the world’s best display. And we’d prefer to not pay a $10 premium for an essential accessory that makes a great device look clownish.

Now there are other cases, I know — but because of the patents on this technology, the only magnetic cover you can buy for the iPad Pro is this one.

But for crying out loud — EXPLAIN THIS SHIT. As if charging the Pencil this way wasn’t dumb enough, how is the charging interface TOO LONG for the lighting port it plugs into?