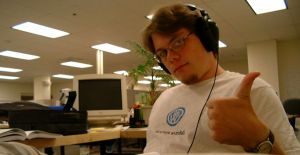 Everybody seems to be nodding their heads these days about the degrading importance of college (myself included). This is in contrast to a some important facts: foremost, that the latest recession hit lower educated workers hard while barely touching those with degrees, especially advanced ones

I don’t doubt that it’s getting harder for college graduates to find careers. Part of this is that poor retirement strategies and a ten-year long bum market are forcing people to work longer. And of course, people love to blame the ineffectiveness of a liberal arts education.

A classic joke goes like this: “Oh, you’re studying philosophy. Maybe, someday, you’ll get a job with one of the big philosophy firms!”

It’s a good joke. I can judge this, because as a rhetorical theory major (okay technically the major was “English Literature and Rhetoric”) you spend a lot of time analyzing texts and concentrating on the soundness of arguments and the efficacy of communication as both a medium for transfer of information and of intent.

In essence, I have a bachelor’s in joke assessment. And I’ve a 15 year career in commercial software development.

Now, I wasn’t just a lit major. I spent four years of my college career working in the computer labs as a student consultant; helping other students understand how to use software programs, debug code assignments and venture into the nascent internet. I took, pretty much every semester, science and mathematics courses. Originally, my design was to switch into the Watson engineering school at Binghamton University.

That is, until I’d taken a few courses there. Consider: it was 1999, and the internet was a powderkeg. Java was storming the castle, making OS and processor architecture obsolete. Relational databases were all the rage; the LAMP stack was busy being born. Amid this, the Watson school taught one class each on “systems,” databases and web design. Nothing on DHTML. And to get there, you need DiffEQ, Multivariable Calc, logic design, x86 assembler, algorithms, physics 1 and 2…

Now, I agree a student should be well rounded. But here we’ve got a curriculum a decade behind the times, instructing students in the basics of specializations they’ll need a PhD to make a dent in and that they’ll otherwise never use.

So I didn’t bother. I parlayed my consulting experience into a little summer job, slacking off and building websites for $15 an hour. A king’s ransom at 21. In three months time, I knew as much about the realities of software development as a CompSci grad student, and four languages they didn’t even teach at school (Java, JavaScript, T-SQL and ColdFusion). Plus I was $7000 richer.

I stuck with my Rhetoric program because it was fun. I didn’t excel at it, metrically; my most important semester I averaged a C-. But I got so much value out of those classes! It was in a rhetoric class where I first learned how to read an audience; in others how to debate with courage something only partially understood and in still another how to accept criticism graciously. I learned that a group can be a curse, that personal excellence matters little if the others choose to brand you as a screw up. I learned how to read texts, quickly, and how to react critically to them. I learned how to inform, how to persuade, and how to avoid being persuaded. I learned what to say, and how not to say it. When to leave my personal beliefs at the door and when to push them to comical extremes.

In short, I learned people: how to communicate with them, and to them, depending on the need.

Anybody who’s advanced beyond the ranks of Junior Software Birdman understands software turns out to be less about Big O notation and proving NP completeness, and almost entirely about communication. Making sure requirements are correct and estimates appropriately aggressive, convincing PMs to push back on customers, making cases for the time to Do Things Right and understanding the unstated requirements being placed upon you. And always reading, reading, reading! Books, tweets, specs, blog posts, white papers, slide decks, code itself and, occasionally, TFM.